Posted on December 8, 2015 by hccummings

So, I’ve commissioned some more character art, this time from my Zack Jackson series. 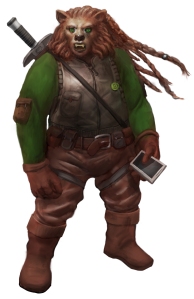 This is Mungus (more properly, Mungaborrarius, son of Goreborrarius Tonnarvassas, First Warrior of Clan Stonetalon), an Ersidian from my Zack Jackson series. He’s a Junior Ranger in the same troop as Zack, Jenny, and the Valtraxian, Ix. Unlike the others, he still lives on his homeworld; his temper has gotten him kicked out of all the local troops.

The large knife on his back was his grandsire’s. Ersidians once had a proud, honor-obsessed warrior culture to which they still pay lip service. Their braids are their badges of honor. The more story beads woven into their braids, the more honor an Ersidian has. Cutting a braid to give to a friend is a mark of great trust and honor and other Ersidians will leap to the aid of one who carries an Honor Braid. Forcibly cutting an Ersidian’s braids is a gross violation and is punishable by death on Ersid. The Earth-Alpha Centauri Alliance feels this punishment is too harsh for a haircut and won’t extradite criminals to Ersid.