It’s pretty simple, really. I don’t blog as much as I should, especially for an author trying to expand his platform. RPG-a-Day gives me decent writing prompts that usually don’t leave me scratching my head and thinking WTF?

Most blogging prompts delve into topics I’m either not comfortable blogging about (i.e. provide pictures of celebrity crushes — I’m 44 and married, believe it or not, I don’t think about celebrity crushes that much and even when I was single, I didn’t), or I don’t feel are relevant to the topic of my blog (i.e. List three things in your purse). I suppose I could spend a month making fun of a particular set of blogging prompts, but at times, that seems arbitrary and cruel. If I could come up with a month worth of blogging topics to make my own prompt list for fantasy/sci-fi authors, then I wouldn’t need a list of prompts to begin with.

RPG-a-Day 2018 – Week Five: SHARE… something you learned about playing your character

I usually GM for my group, but over the last several years of playing, I have learned a valuable lesson: don’t play talky, charismatic characters. I’m not a good improvisor and I feel neither comfortable nor convincing playing a smooth-talking character. Sauve, slick-talk coming from me sounds about as natural as an oral bowel movement.

From now on, I’m sticking to techs, pilots, and fighters (whether they fight with swords, magic, fists, or guns). No smooth-talking con men, slick politicians, or diplomatic leaders.

I mean, have you heard about the plight of the Duros people?

RPG-a-Day – Week Five: SHARE… a friendship you have because of RPGs

I could handle this like a Follow Friday on Twitter and just list the social media handles of my friends I met because of RPGs, but that would be a gargantuan list. Since I’ve been playing RPGs since I was eight years old, they’ve been a part of my life for almost as long as I can remember and the vast majority of my friendships can be attributed to RPGs. It would be easier for me to list friends I have that I met because of some other reason. Chief among this non-RPG attributed friendship would be the one I share with my wife. But, she plays RPGs now, too, so there’s hardly a corner of my social life that isn’t touched by RPGs in some way.

My answer for this ties in with yesterday’s post. Ironically… paradoxically… strangely? I’m thankful for Critical Role, Wil Wheaton, and others like them who serve as such great ambassadors of the hobby. I may not listen to, watch, or even like actual plays and livestreams of games, but that doesn’t mean I don’t recognize how important they are to helping millions of people understand this hobby I’ve enjoyed most of my life.

I don’t feel comfortable making recommendations about this, because I don’t watching RPG livestreams or actual plays. Why? Because I don’t particularly like them.

Now, that doesn’t mean they’re not good; it just means they’re not for me. I, personally, don’t find it particularly enjoyable to watch other people play a game. I enjoyed Wil Wheaton’s Tabletop series. I thought it did a good job explaining how the featured board games worked. Critical Role is hugely popular and has made RPG fans of people who don’t actual play the games themselves. They’ve done a great job of bringing awareness of the hobby mainstream. Obviously, a lot of people enjoy watching livestreams or RPG actual plays and/or find something of value in them.

I suppose they could be good at figuring out how a system works, but I think you’d have to either watch a lot of them or you’d have to scour the feeds to find one that actually sets out to explain the system. Maybe that’s easier than I think; I’ve never looked because thus far, it’s not something I’ve needed to do. Perhaps the next time I decide to run a game that I’m not all that familiar with, I’ll look up some actual plays/livestreams of the system and see if I can answer that question for myself.

I still don’t think I’m going to enjoy watching other people play a game as much as many other people do, though. It’s just not my jam.

Well, that’s pretty easy. Over the next year, I would like to finish our Tomb of Annihilation game and start a new campaign using a system we have not played that extensively. Of course, what that will be will be determined by everyone’s mood, but if, for example, everyone is jonesing for a Star Wars game, I would use WEG D6 system instead of FFG narrative dice system (even though I’ve run multiple Star Wars d6 campaigns, but they were all in the 1990s).

If I had to choose right now, I might go for something like Hollow Earth Expedition, Pulp Cthulhu, Tales from the Loop, or Predation, but by the time we wrap up Tomb of Annihilation, a couple of us will have Flash Gordon, John Carter of Mars, and who knows what else? I’m certain that there will be a multiple session hiatus wherein we will play Blades in the Dark.

One game came to mind immediately: Blades in the Dark. When I needed to put my Tomb of Annihilation game on hold while I finalized preparations to move (i.e. when I disassembled my gaming table and packed up all my stuff), two fellows in my gaming group stepped up to run games for us. One, Starfinder, I was already familiar with. I liked the setting, but ultimately, Pathfinder-style games aren’t my thing (although I maintain I would play the HELL out of the Starfinder setting in D&D 5E). The other game, was one I think I’d heard of, but that’s all: I’d just heard the name. I knew nothing about it.

So, we made a crew of Bravos and played. The setting is a sort of fantasy gothic steampunk Victorian-era world, a world where the sun has gone dark, and you and your companions are the criminal element in this city of canals, corruptions, and vengeful spirits. We called ourselves the Barbican Bastards, and now, after having played it three or four times, we’re still very low on the totem pole and would be comically inept if we didn’t come close to dying so often (or as close to dying as the game allows; generally, your character is only going to die if you really want them to for dramatic purpose. You can, however, be incapacitated for enough game sessions that it’s useful to have a backup character). To me, if feels a lot like a Victorian-era Shadowrun, albeit with a game system that is much easier to grasp.

There’s a sci-fi version now, too: Scum & Villainy. I highly recommend checking them out if you’re burning out on classic fantasy RPGs, but still want to play less-than-moral characters, shall we say.

Most of my gaming has revolved around fairly “mainstream” RPGs: Star Wars, Dungeons & Dragons, now Blades in the Dark. I’ve played so many, every time I think of a title I’ve really enjoyed, I can think of people who are big fans or companies that are trying to revive the brand. Others have said we’re enjoying an RPG Renaissance right now, and I wouldn’t argue that. Of course, doing the work I do for the ENnie Awards means I’m exposed to a heck of a lot more RPGs than most people, so I think I’m too close to the question to be able to give a good answer. 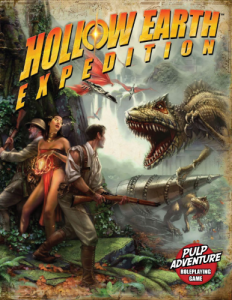 I’ve played so many great games, it’s hard to pick just one that I would play again if I could. Actually, it’s not that difficult, since I like pulp and dinosaurs, there’s only one option: Hollow Earth Expedition.

It uses a dice pool system, but to determine success or failure, you only need to count how many dice come up with an even number. It’s a very fast playing system, and while the default setting is the Hollow Earth, the world beneath our world, there are sourcebooks to explore mysteries on the surface world, as well as on Mars. Plus, since it’s pulp and takes place in the late 1930s and early 1940s, the most socially acceptable targets are always there for a good punching, shooting, or dinosaur stampede: Nazis. You can never go wrong fighting Nazis.

This is a tough one for me. When I think of non-dice systems, the only one I can think of is Amber Diceless and I have never played it, so I don’t know if I like it or not.

I like plenty of games that don’t use dice, but none of them are role-playing games.

It gets trickier if the question isn’t using “system” in the sense of “rules system” but rather in the sense of a mechanic (though since yesterday’s question was about dice mechanics, maybe it’s not… who knows? Crunchy stuff like systems and mechanics are things I dig deeply into; I’m more of a fluff guy). I like Hero Point systems (whether they’re called Bennies, Hero Points, Inspiration, etc.) because I enjoy mechanics that let players do cool things that may not otherwise be allowed by the rules. Anything that allows the players to think “Wow, that was awesome!” is something that helps make the game session better for everyone.